It was one of those serendipitous e-mails that made my heart sing: my friend Livia was going to be in Brussels at the same time I was.

We had met six years before, when we spent a long and miserable year hating Winnipeg together. I had arrived from Edmonton, and was trying to convince myself that I could fit into the life of a tenure-track academic. Livia,  Hungarian by birth with a recently completed post-doc from the University of British Columbia, was working at a corporate job in environmental economic forecasting.

We met in a Saturday afternoon drama class where her cheeky responses to the cheery instructor’s get-to-know-you questions  (“No, I don’t like Winnipeg. No, I don’t like my job either”) made me seek her out at the class break. We kept each other propped up that year with brunches, dinners, shopping trips, and commiserating stories about how hard it was to make friends in Winnipeg. By June, I had resigned my position and was back home in Edmonton. Livia would tough it out in Winnipeg for several more months before accepting a job transfer to Ottawa.

We had connected a couple of times since that – once when her job took her to Calgary, and once when I visited her in Ottawa. But to meet Livia in Brussels made me feel exotic, like an international jetsetter from a 1950s black and white movie (“Oh, yes, dahling, of course I’d love to have a glass of wine with you next weekend 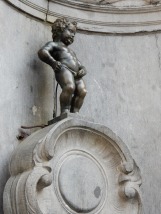 By the time Livia arrived in Brussels, my husband and I had been there for several days, and had already visited some of the city’s famous landmarks : the naughty Mannekin Pis; the Atomium, a

leftover monument from the 1958 World’s Fair; the glittering guild halls of the Grand Place. So the time I spent with Livia would centre around girlfriend walking and talking with Brussels as our backdrop.

Because we hadn’t set out from our hotels with particular destinations in mind, we were delighted by discoveries every time we turned a corner. Early in the day, we ran into the start of some sort of children’s festival, featuring balloons of every size and shape. 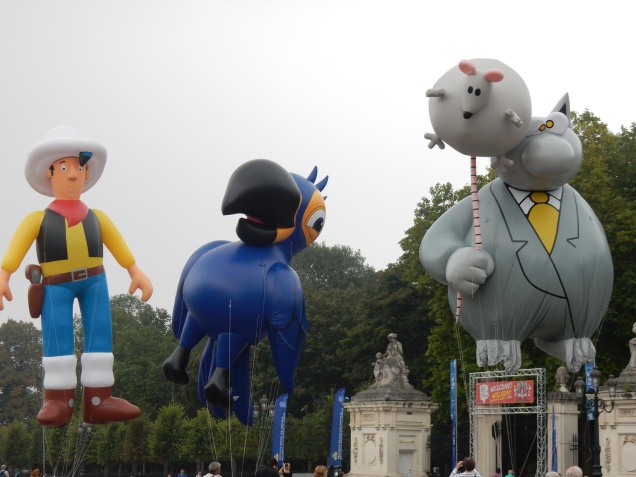 Closer to the Grand Place, a beerfest was just getting underway, its pageantry creating a far more elegant celebration than any beer-associated event we’d ever attended in Canada.

Unlike our shopping trips in Winnipeg, that Saturday we were more interested in browsing, an activity elevated to the realm of awe-inspiring by the designers of Brussels shop windows.

And because we often paid more attention to our conversation than to our city map, we frequently misjudged both how long it would take to get to a certain street and how to get back to it when we overshot. These oversights led us off the beaten tourist paths and into the Saturday routines and celebrations of ordinary Brusselaars: 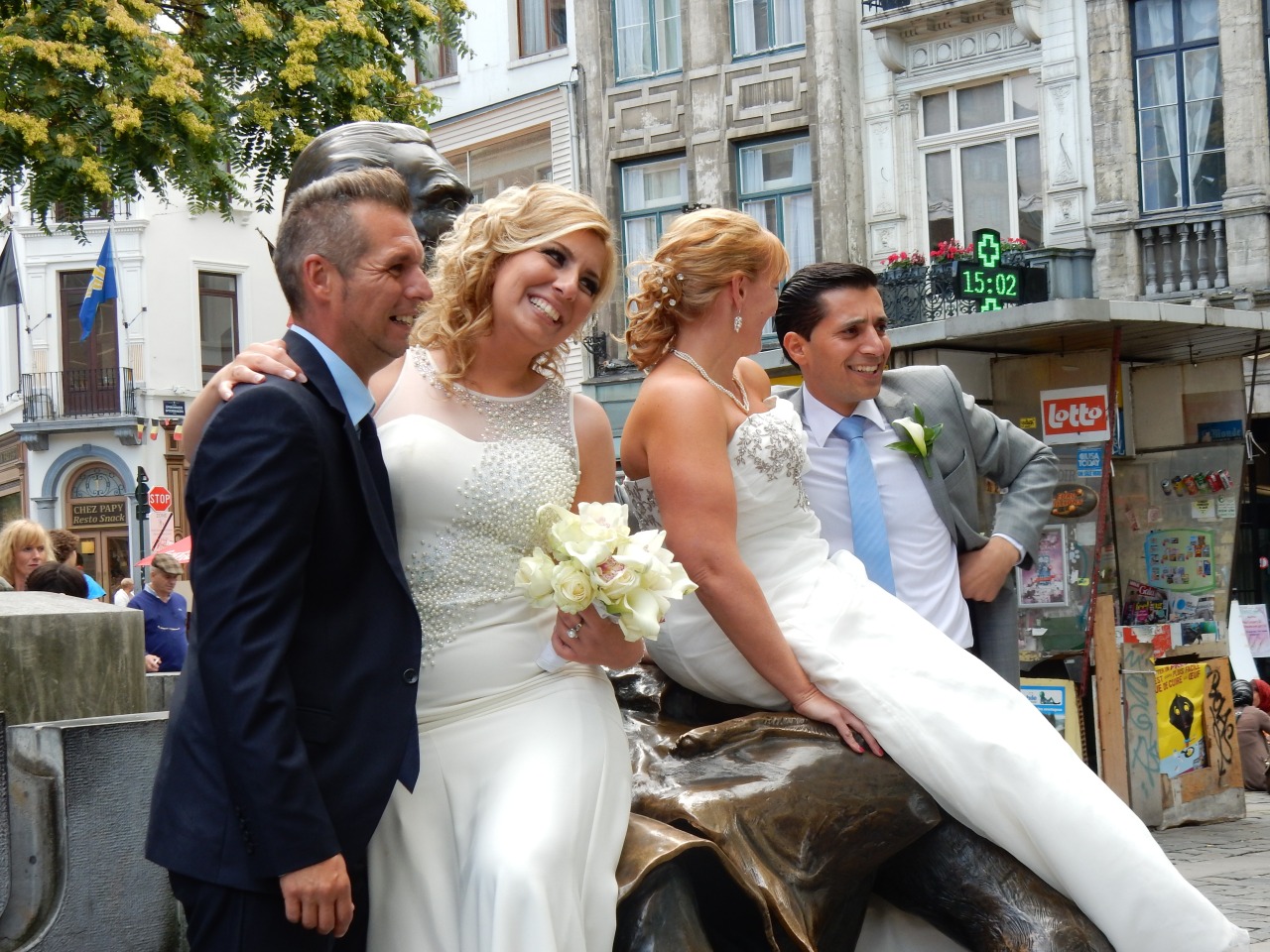 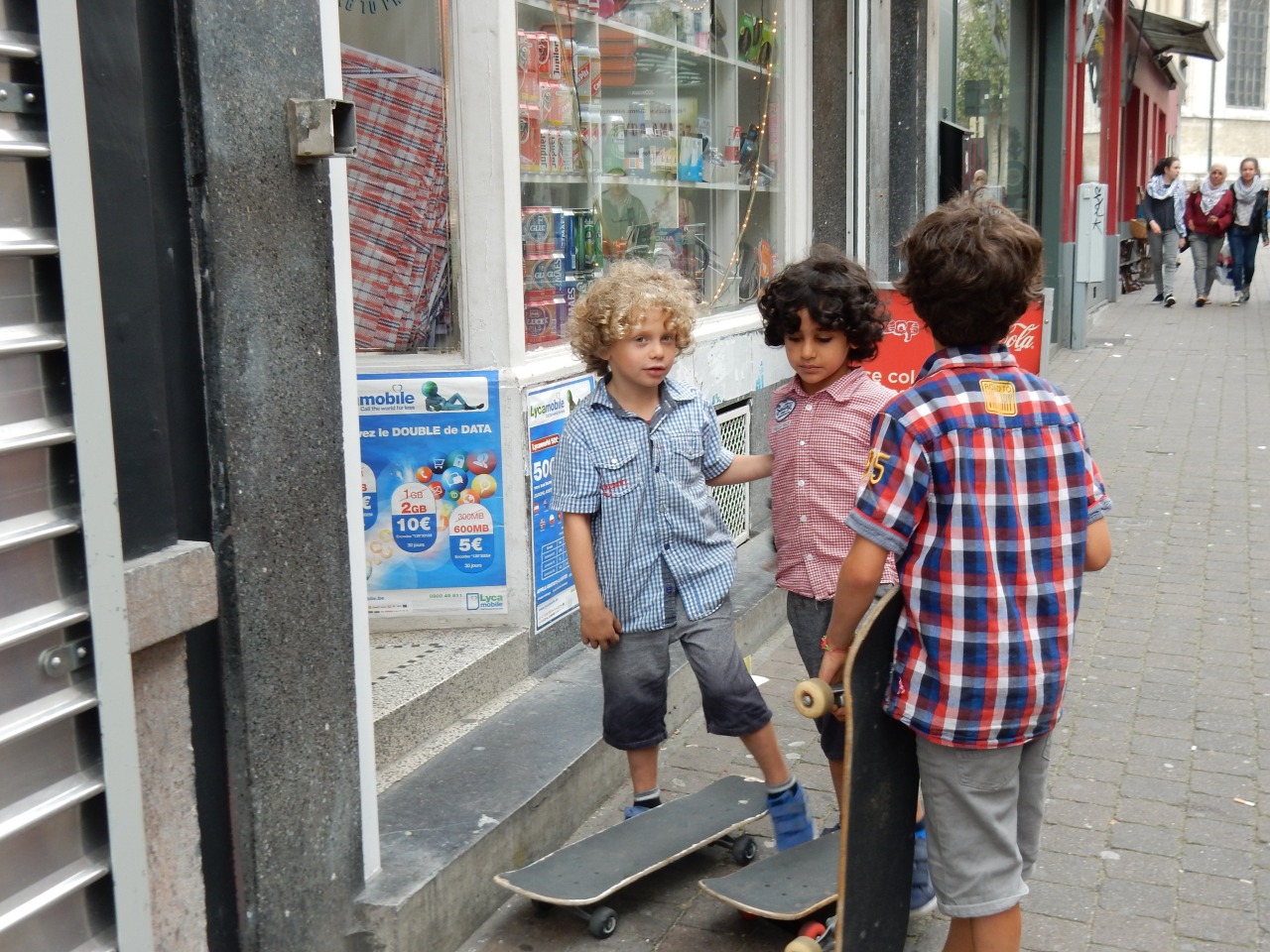 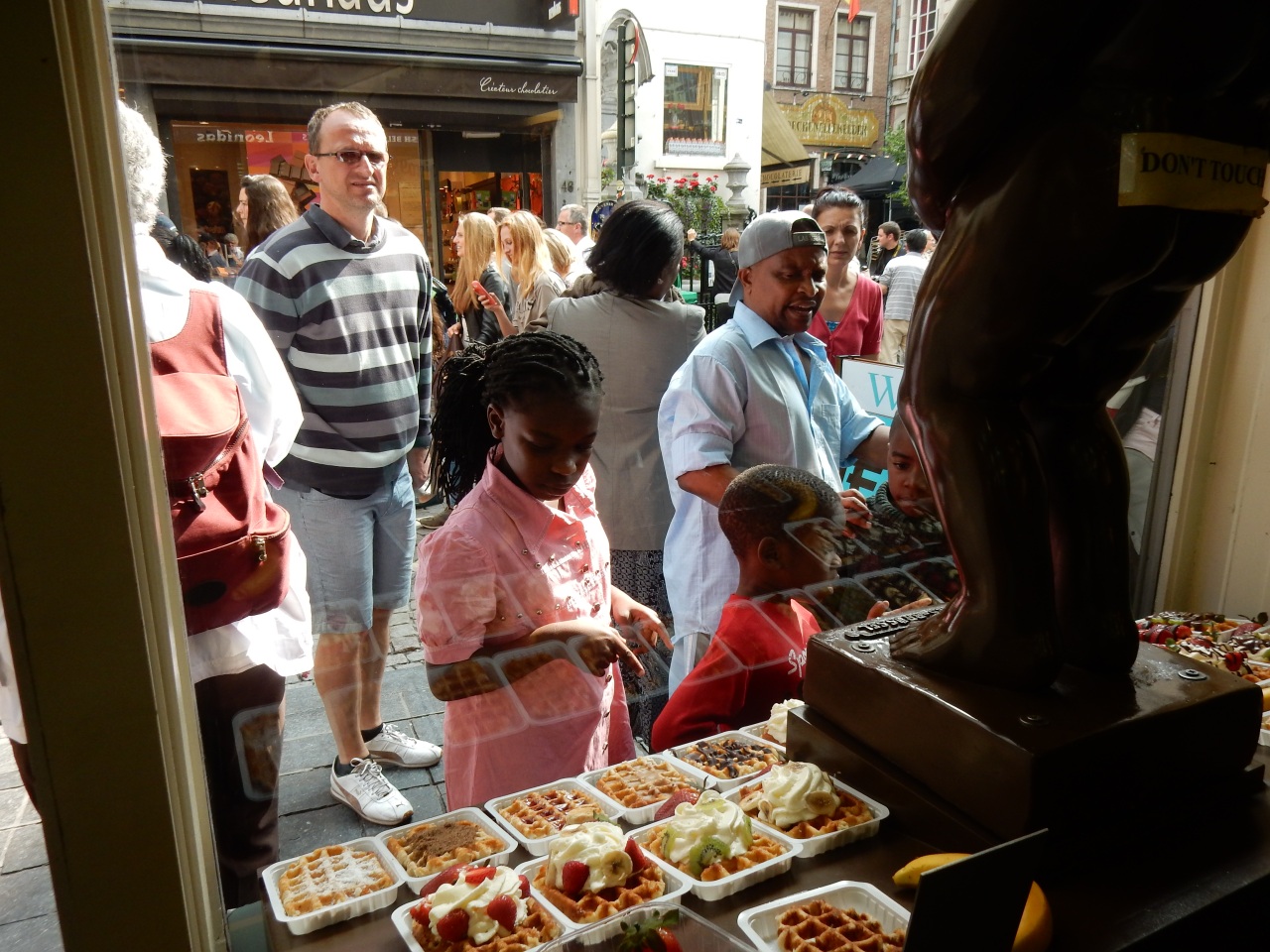 By the time we sat down for own beer at the end of the day, we were not only reacquainted with each other’s lives: we felt as though we had made friends with Brussels too.

Two years later, I had trouble reconciling the  joie de vivre photos I had taken during our walk around Brussels with the images  that dominated the media after the terrorist attacks: a man  lying next to his overturned suitcase at the airport; emergency workers helping an injured passenger leave the crumpled subway station; a woman sitting dazed in front of a shop, covered in blood and concrete dust, while another made a desperate call on her cell phone. I didn’t want to recognize the places in Brussels where those photos had been taken. But I’d passed through that airport with my husband. Maybe we’d even had coffee at that Second Cup where one of the bombs was detonated. I knew where that subway station was, and I wondered if Livia and I might have walked down the street where the two women were photographed. I didn’t want to, but I thought, that could  have been us.

In the days that followed the attacks, I watched headlines that tried to make sense out of senselessness:  “Grim Awareness, Suspicion Spreads As Brussels Reels From Bombings;” “Is This The War We Can Never Win?”; “Terror As A Fact Of Life.” But every now and then, in the dark aftermath, I saw a glimmer of hope in the news.  My hometown school board announced they would not cancel all international student field trips, preferring to evaluate each on a case by case basis and leave parents with the final decision.  Marsha Lederman, a Globe and Mail columnist, discussed how the randomness of such tragedies make us feel vulnerable because the people involved are just like us. They couldn’t have known what was coming when they lined up at the check-in counter or boarded the train in Brussels that morning.  “One minute you’re travelling on business, or taking a bucket-list vacation, or heading to the office. And the next, it’s over.”

Lederman’s piece on the nature of randomness may seem like an odd place in which to find hope. But she reminded me of a truth that most of us know but choose to ignore: that life has many unscripted moments over which we have no control. Sometimes, those moments alter life negatively: we, or someone we love, lose a job, or a family member, or get a gut-wrenching health diagnosis. But that randomness can also bring overwhelming joy: we meet a stranger in a coffee shop at just the right time, or pick up the phone when we hadn’t intended to, or round a corner in a European city with a friend who just happened to be there at the same time we were.

So, I hope that if you’re planning a trip to Brussels, or any other place in the world, that you screw up your courage and get on that plane. If you’re a parent whose child is heading off on an international field trip, I hope you give them a long hug and let them go. The only way that terror will become a fact of life is if we let it. And that’s a situation over which we absolutely have the last word.

4 thoughts on “Brussels on my mind”