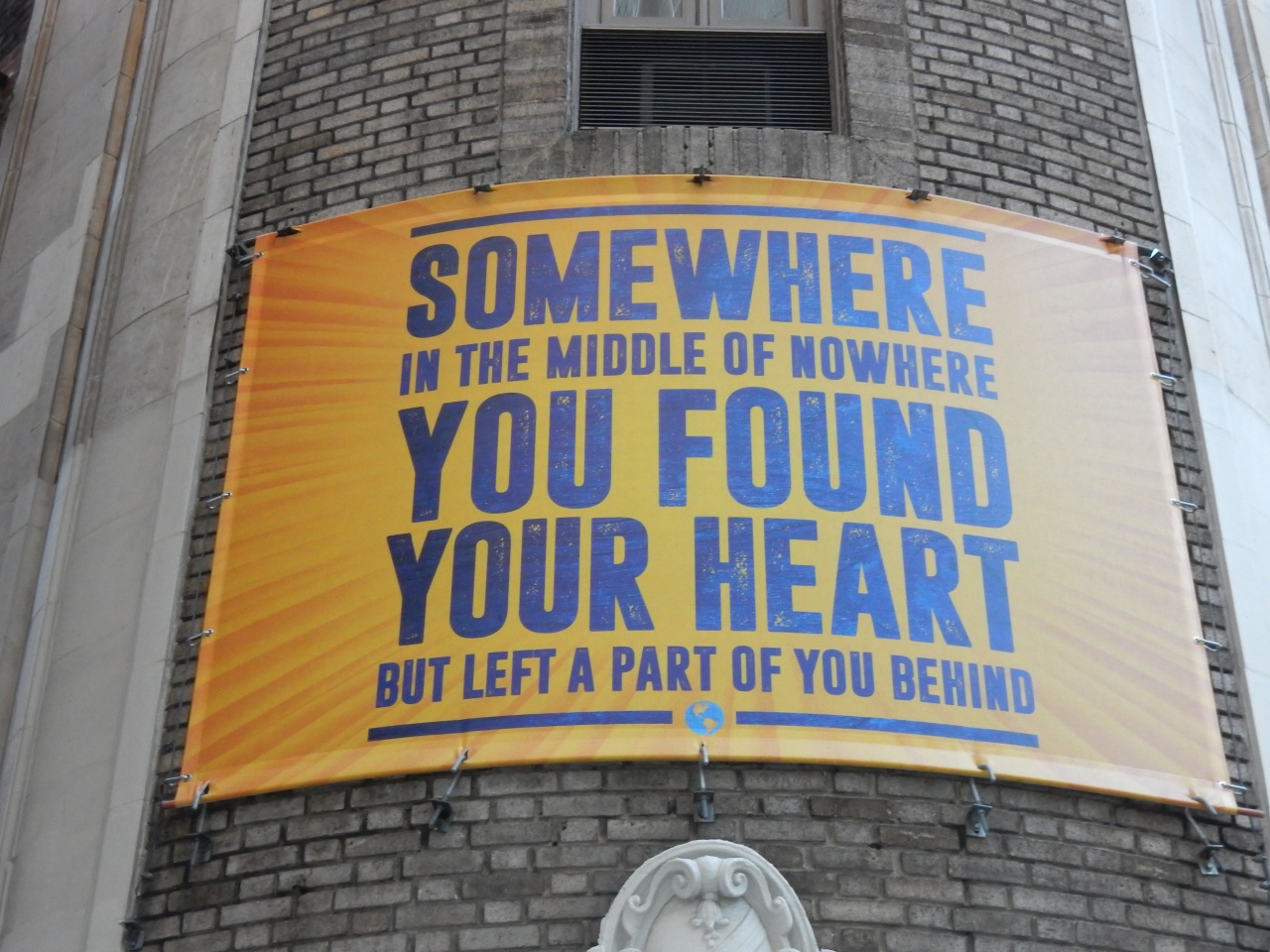 Tonight we honor what was lost, but we also commemorate what we found.

After watching in horror as the twin towers burned, after doing my best to reassure anxious students when I wasn’t feeling so calm myself, I found the nearest computer and e-mailed my friend Angela in New York City. Her return message came quickly: “Yes, we’re OK. Thanks for checking. Others not so lucky.”

I visited New York City twice after the 9-11 memorial opened for public viewing, but couldn’t bring myself to go there either time. I only went this trip because a friend had told me, “You should go. It’s not as awful as you think. It’s actually kind of peaceful.”

She was right. The Easter weekend crowds were respectful, parents quietly explaining the memorial to children who had never seen those long ago television images. The double footprints of the towers are now filled with water flowing inward, the surrounding stones inscribed with the names of those who were lost. Here and there, a white rose, signifying that today would have been someone’s birthday. 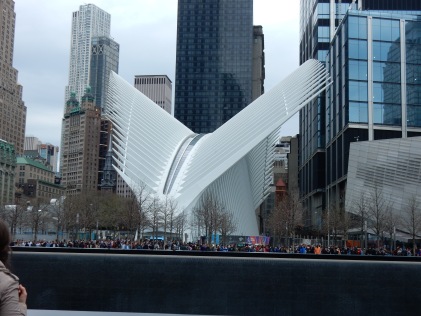 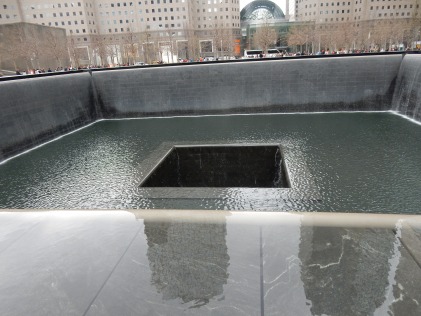 For some of the New Yorkers we’ve been meeting, the memories of that day are still painful. Our young tour bus driver’s voice quavered when he talked about it. The gregarious host of a walk we took through Greenwich Village said she still hadn’t been to the 9-11 Museum. “I couldn’t bear to hear their voices, “she said. 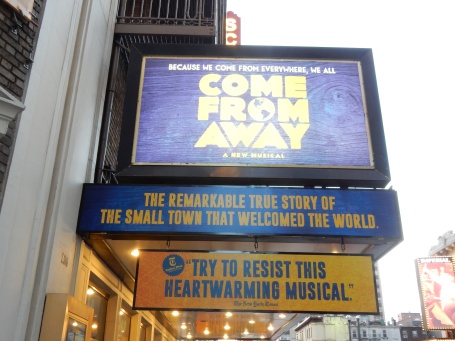 But there are 16 voices associated with the tragedy that New Yorkers are not only listening to but celebrating, embracing, coming back to hear again and again. They are the cast of the Canadian musical Come From Away, which depicts the kindness and generosity extended by the residents of Gander, Newfoundland, to almost 7000 airline passengers whose planes were forced out of the sky on September 11, 2001. The play is based on thousands of hours of interviews with the Newfoundlanders and the “come from aways” – how they coped with the five days they spent together, and how they changed as a result of their interactions.

Through music and song, the play details the townspeople pulling together to provide places to sleep; plentiful and appropriate food for everyone, including Jews, Muslims, and vegetarians; language translation; pet care; telephones; and generous helpings of compassion to people who a few hours earlier had been on their way to somewhere else.  No problem was too large to be solved, no detail too small to be overlooked.

The stories of individual heroes – from the town and from away – showed the deep wells of  strength, good will, and humor that people tap into under adverse circumstances. Beverly Bass, American Airlines’ first female captain, had been piloting a 777 from Paris to Dallas when she was ordered to land in Gander, unsure whether the airport conditions could handle a plane of that size. Bonnie Harris, the manager of the Gander SPCA, demanded and received access to the airplane holds, scrambling over suitcases to find and care for dogs, cats, and two chimpanzees – one of them pregnant. A team of cardiologists on their way to a conference stepped up to clean the washrooms at the local school where hundreds of people were bedded down in the gymnasium.

The five days also brought unfolding tragedies. A New York City woman left message after message for her firefighter, none of them returned. A gay couple was torn apart when one man, devastated by his separation from his Brooklyn family, accused his partner of indifference to his grief. An Egyptian passenger faced violence when his Arabic telephone conversation was misinterpreted as a potential terrorist message.

The play’s final moments depicted touching farewells, promises to stay in touch, and suggestions of new romance, followed by the joyous 2011 reunion between the Newfoundlanders and the plane people. Perhaps the best lines of the closing act occurred between the woman who had lost her firefighter son, and the Gander schoolteacher whose compassion, friendship, and humor continued to be a source of strength.

“Why can’t you ever tell a Newfoundlander a knock-knock joke?” said the NYC woman.

“No idea,” said the Gander woman.

“OK,” said the New Yorker. “You be the Newfoundlander, and I’ll tell you a knock-knock joke.  Here goes: Knock knock.”

To which the Gander woman replied, “Come on in. The door’s open!”

To learn more about the Come From Away story, including footage filmed in Gander at the time of the original events, go to comefromaway.com/learnmore.

2 thoughts on “Coming from away”