The theme in my FB newsfeed this morning: We’re sick of snow, we want it to stop; spring’s on Tuesday but it looks like January; that’s enough. I saw a “snow shots” thread where people around the UK were posting winter white photos of their back yards, and I participated with one of mine from Edmonton.

So, time for a vacation, right? But what do you do if time and money are at a premium, and you can’t answer the call to get away somewhere warm?

Try viewing your snowy old hometown through a tourist lens.

I was motivated to try this by a group of enthusiastic Uruguayans who landed at the Faculty of Extension, where I work, for a two week language and culture stay back in January. They left 36C behind in Montevideo and got here the day that Edmonton hit -36 with the wind chill. Every time I saw them, they looked frozen, but totally happy. “We’re having a great time!” they said. “We’ll probably never get the chance to experience winter like this again in our lives, so we want to do everything!”

They found more wintery things to do in Edmonton than I knew existed. Or rather, I knew they existed, but I’d stopped seeing them as a visitor would – as something novel, waiting to be embraced. Skating is no longer a big deal to me, toasting marshmallows is pedestrian, and my culinary palate is used to poutine, borscht, and pyrohies. But to the Uruguayans? A total delight. 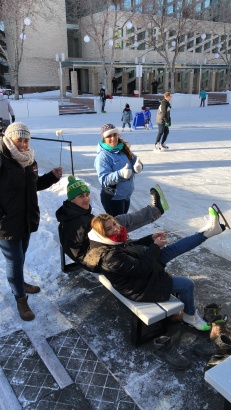 After they left, my perspective on Edmonton in the winter began to thaw. It turns out Fort Edmonton Park is quite lovely muffled in snow. You can even stay there overnight, in the picturesque Selkirk Hotel, and treat yourself to brunch the next morning.

Just south of Edmonton in Nisku, I discovered Righand Distillery, one of Alberta’s first craft distilleries, and the Cook Shack Restaurant, which serves some of the best BBQ I’ve tasted. With a few friends in tow, we ate, toured, and sampled until it really didn’t matter what the weather was like anymore.

Last weekend, I hoofed downtown to experience Edmonton’s new funicular. All winter, I’d been watching it get built from my bus on the way to work, but now I needed to try it out for myself. Designed to provide quicker, more direct connections between downtown and the river valley, with stunning views from its floor-to-ceiling windows, it whisked me and other curious explorers from the snowy pathways below the Low Level Bridge to the top of 100 Street in record time. 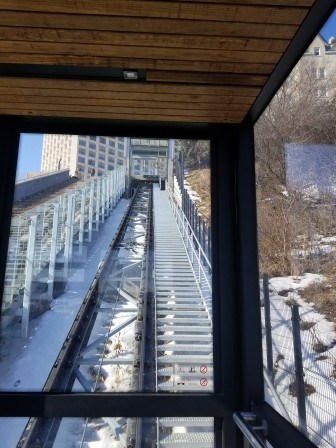 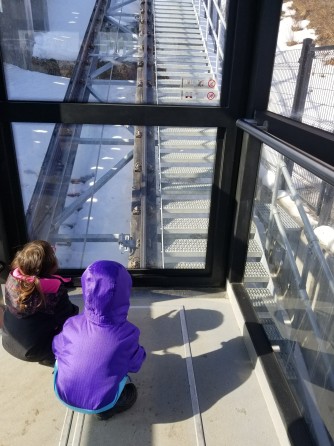 And speaking of fully experiencing daily sights, I finally paused to enjoy the guitar buskers who frequently play at the top of the Central LRT station escalators when I’m on my way home from work. If I’d seen them in the New York City subway, I would have filmed them and raved about their talents on Facebook. So, last week, instead of dashing by to catch my bus, I requested a Mark Knopfler tune, and they were happy to oblige.

So, if winter seems to be stretching out endlessly where you are, why not try being a appreciative traveller in your own town? You may be bypassing sights that will give you the lift you need to see you through to that next vacation. And who knows? You may have such a good time that you’ll decide to stay put at home for a while and see what else is on offer right outside your front door.

2 thoughts on “Travelling around your own snow town”